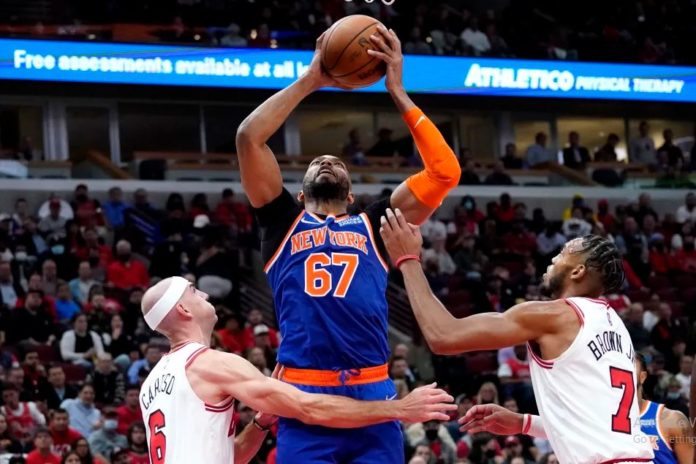 CHICAGO (AP) — Kemba Walker scored 21 points, RJ Barrett added 20 and the New York Knicks hung on to hand the Chicago Bulls their first loss of the season, 104-103, on Thursday night.

Julius Randle had 13 points, 16 rebound and nine assists. Derrick Rose came off New York’s bench to score 12 points against his former team as the Knicks won their second straight and improved to 4-1.

This one wasn’t as easy for New York. It boiled down to a stop of Chicago’s DeMar DeRozan as time expired after Bulls went on a 12-0 run in the final minutes to nearly tie the score in a game the Knicks seemingly had wrapped up.

“Right now, we’re still getting a feel for each other,” New York coach Tom Thibodeau said. “Every game we’re getting better and better.

“I love the fact that everyone is sacrificing for the team and putting the team first. That’s how you win big in his league.”

The Knicks had to settle for a narrow victory.

Chicago star Zach LaVine scored 25 points, despite playing with a torn ligament in his left thumb.

LaVine’s dunk with 9.5 seconds left trimmed New York’s lead to one point after the Knicks held a 104-91 advantage with 2:59 left. LaVine’s thumb was taped up after he was injured Monday in Toronto.

Randle missed a pair of free throws with 4.7 seconds left to give Chicago the final possession, but DeRozan missed a 15-foot, pull-up shot with Barrett helping to cover him.

“Like any team at home, they have their fans and they don’t want to lose,” Barrett said. “They’re undefeated and a good team and they’re going to make a push.”

Barrett, a 21-year-old Toronto native, had an idea of what DeRozan might try to do. Barrett said he idolized DeRozan, 13-year veteran and four-time All-Star, when DeRozan played for the Raptors.