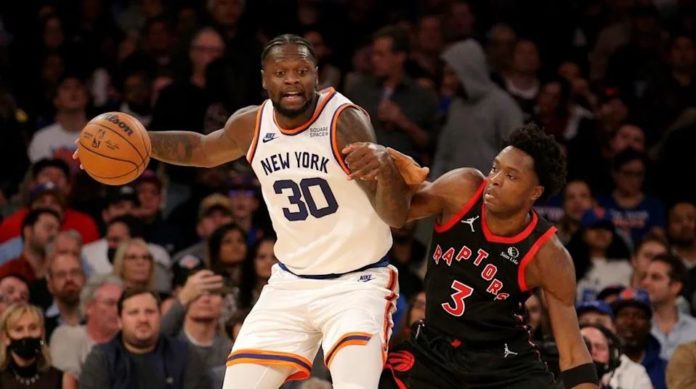 Julius Randle scored 18 points in the first quarter on Monday. He only had four the rest of the way.

Tom Thibodeau said New York went away from what worked in the first quarter – driving and kicking. And the club also didn’t take advantage of the attention paid to Randle.

“So you’ve got to read the game, put it on the floor and you’ve got to spray (the ball). And when we did that, we were able to find (open shots),” Thibodeau said. “If they’re going to commit to sending two to (Randle), he’s got to keep moving, we’ve got to keep searching. And the game tells you who’s taking the shots; we don’t want to take bad shots, we want to take good shots. So anytime there’s two on the ball, it’s good. It should be easy offense for everyone else. He’s the type of player that’s going to command a lot of attention so we’ve got to take advantage of that.”

The Knicks let a 15-point second quarter lead slip away quickly. It was a combination of turnovers (six in the third quarter), Toronto’s offensive rebounds, and strong shooting. The Raptors took 23 more shots than the Knicks over the final three quarters.

Thibodeau noted afterward that the Knicks lacked effort in some areas (allowing offensive rebounds, transition defense). He also suggested New York wasn’t aggressive enough at times (“You’ve got to own your own space”).

But one of the bigger mysteries from this game was what happened with Randle over the final three quarters. Randle, for his part, said Toronto didn’t do anything differently after the first quarter.

Outside of that first quarter, Randle’s offensive numbers have been down over the past four games.

Maybe he and the Knicks are still adjusting to their new personnel?

Maybe it’s simply a result of the club’s depth/balanced scoring?

Either way, it’s something worth keeping an eye on.

One positive for the Knicks on Monday? RJ Barrett continued his strong play. On Saturday, Barrett had a career-high 35 points and played a strong all-around game in a win over the Pelicans. He remained hot on Monday, scoring 27 points on 9-for-13 shooting.

“He’s an elite talent. Then when you start to measure his intangibles, you look at the toughness, you look at the basketball IQ, you look at competitiveness. (And) he’s got a great work ethic. Those type of guys always get better,” Thibodeau said of the third-year player. “He has a lot of pride in what he’s doing. He’s put a lot of time into shooting, into his defense, into finishing. You just look at what he’s done from a young age, I thought he had a terrific year last year, averaging 18 points a game on a playoff team. So that’s not an easy thing to do. He got better and better as the season went along, carried it over into the summer, carried it over into the fall and is carrying it over now.”