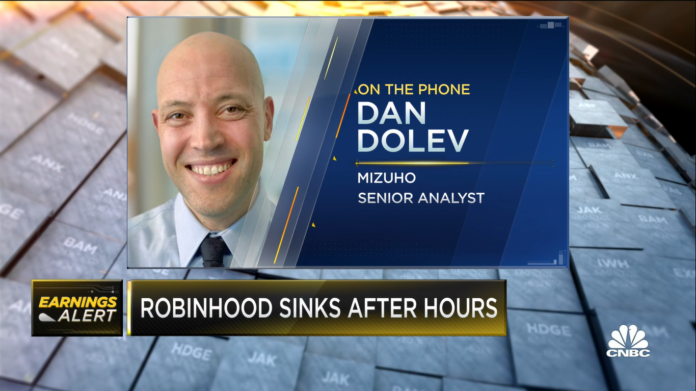 Stock-trading app Robinhood gave a bleak revenue forecast for the first quarter of 2022 on Thursday as its latest earnings report showed a decline in active users.

Shares of Robinhood rose 9.7% on Friday after losing more than 14% earlier in the day.

The newly public brokerage anticipates first-quarter revenue of less than $340 million, down 35% compared with 2021. Wall Street’s consensus estimate was for $448.2 million in revenue for Q1, according to FactSet.

Monthly active users fell to 17.3 million last quarter from 18.9 million in the third quarter. This number was also below estimates of 19.8 million, according to FactSet.

Meanwhile, net cumulative funded accounts totaled 22.7 million at the end of the fourth quarter, about in-line with estimates. This is up from 22.4 million accounts in the third quarter. To be sure, Robinhood added 10 million accounts alone in 2021.

For the fourth quarter, Robinhood reported a net loss of $423 million, or a 49 cent loss per diluted share, wider than the 45 cent loss estimate collected by Refinitiv. However, Robinhood posted $363 million in revenue in the final three months of 2021, slightly above analysts expectations of $362.1 million.

Robinhood is about to face its toughest comps in the first and second quarters of 2022 following its record year in 2021 from events like the GameStop short squeeze.

Robinhood’s stock is more than 86% off its most recent high since the trading app’s July 2021 public debut. Shares are down more than 34% in January, bringing its market capitalization to less than $10 billion.

However, Robinhood is still investing heavily in its crypto business.

“Robinhood has set aggressive goals to start opening its crypto platform up to customers internationally in 2022. The company believes in the immense potential of the crypto economy and sees a big opportunity in serving customers across the globe,” the company said in a release.

Robinhood’s assets under custody rose to $98 billion on an annualized basis. Average revenue per user decreased by 39% to $64 year over year from $106.

Looking ahead to 2022, Robinhood said it will build products intended to support long-term investing, as well as products in spending and savings. Some of these products will include instant debit card deposits and withdrawals.