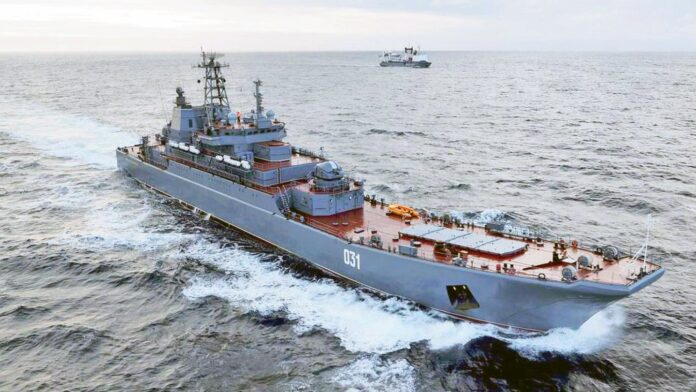 The latest three examples from the six amphibious warfare ships that left the Baltic Sea earlier this month entered the Mediterranean Sea today, where the Russian Ministry of Defense has said they will take part in naval maneuvers. However, with tensions surrounding Russia and Ukraine remaining high, there has been concern that the amphibious flotilla’s ultimate destination may be the Black Sea. From there they would be well-positioned to support a potential new Russian intervention in Ukraine.

The Russian ships were reportedly shadowed by a Spanish Navy Meteoro class offshore patrol vessel and at least one U.S. Navy P-8A Poseidon maritime patrol aircraft also appears to have been in the vicinity during their passage.

The other three Ropucha class ships from the Baltic Fleet, which had preceded the Northern Fleet flotilla on its passage through the English Channel, are reported to have already entered the Mediterranean, two days earlier, via the same route.

Previously, the Russian Ministry of Defense had announced that all six of these amphibious warfare vessels would take part in large-scale maneuvers planned in the Mediterranean. Other warships expected to participate are the Slava class cruiser Varyag, Udaloy class destroyer Admiral Tributs, and the fleet oiler Boris Butoma, all from the Pacific Fleet.

Meanwhile, another Russian Navy vessel, the Vishnya class intelligence-gathering ship Vasiliy Tatishchev, entered the Mediterranean via the Strait of Gibraltar last week. Its destination is unclear, but it could be a potential participant in the upcoming Russian naval manuevers.

While the Russian Ministry of Defense did not specify exactly when the Mediterranean maneuvers will take place, they are configured as part of a much wider series of drills that are being run by the Russian Navy around the world. These will see activities in the North Atlantic and Pacific regions and are expected to involve around 140 ships and 60 aircraft, in total.

At the same time, with a focus on the build-up of Russian forces around Ukraine’s borders, there remains the concern that these naval maneuvers, as well as fo due to take place in Belarus, could be part of the Kremlin’s planning for a new campaign against Ukraine. These fears have been reinforced not only by the sheer scale of the Russian military deployments in the border areas but also the appearance of certain offensive weapons systems, including Iskander short-range ballistic missiles and combat aircraft.

As for the six amphibious warfare ships now in the Mediterranean, should Russia launch an invasion of Ukraine, some or all of these would be expected to continue to the Black Sea from where they would likely take part in amphibious landings along the country’s southern coastlines, especially in the Sea of Azov.

All three of the Northern Fleet amphibious warfare ships now in the Mediterranean, and the three from the Baltic Fleet that are expected to join them, are able to carry different combinations of tanks and other armored vehicles, as well as troops, and equipment, and can deliver these directly onto the beach.

For now, however, there is no confirmation that the Black Sea is the planned final destination for the amphibious warfare ships, let alone the other warships that are expected to join them in the Mediterranean for joint maneuvers. Some of their jobs could just as easily be a distracting force for the powerful NATO armada that is now operating in the eastern Mediterranean.

NATO will surely keep close tabs on movements of Russian Navy vessels in the wider region. The alliance also has its own naval maneuvers underway in the Mediterranean, with the Neptune Strike 22 exercise having begun earlier this week, with the Truman Carrier Strike Group and the carrier USS Harry S. Truman at its center. Other aircraft carriers are taking part, too, with the French Navy’s Charles de Gaulle and the Italian carrier Cavour involved.

Although Neptune Strike 22 has been planned since 2020, it inevitably now has additional significance in light of the situation with Russia. White House press secretary Jen Psaki said Monday that “this exercise will help demonstrate the unity, capability, and strength of the transatlantic alliance.”

Elsewhere within the alliance, NATO members have deployed other naval assets to the region in direct response to the tensions around Ukraine. Spain has announced plans to send a destroyer and minesweeper to the Black Sea, with the potential to deploy fighter jets to Bulgaria. France has said it’s considering deploying troops to the region, and other reinforcements of the alliance’s eastern frontier remain possible. On top of this, the U.S has already put around 8,500 troops on alert for possible rapid deployment to the region, to reinforce the NATO Quick Response Force, or to be “postured to be ready for any other contingencies as well,” according to Pentagon spokesman John Kirby.

Reinforcements are also arriving in the Baltic region, including six F-15E Strike Eagles from Seymour Johnson Air Force Base, South Carolina, that touched down at Ämari Air Base in Estonia yesterday.

On the political side, meanwhile, the Kremlin said today it remains open to further talks with the United States, but that it’s also clear that Washington had not met Russia’s main security demands, including a promise that NATO would not expand to include Ukraine.

Kremlin spokesman Dmitry Peskov said that it was in the interests of both Moscow and Washington to continue dialogue but only on what Russian media reports described as secondary questions and not on the fundamental ones.

”Based on what our colleagues said yesterday it’s absolutely clear that on the main categories outlined in those draft documents… we cannot say that our thoughts have been taken into account or that a willingness has been shown to take our concerns into account,” Peskov said.

The U.S. response reportedly includes proposals to address military competition in Europe, including specific measures to reduce confrontations in the Black Sea and to introduce missile inspections on each side.

There remains, at least, the possibility of further talks on secondary issues, which could potentially help defuse tensions surrounding Russia and Ukraine. For now, however, Russian naval activity looks like it will continue to focus on the Mediterranean, with the potential that at least some of the warships now there may still swing north into the Black Sea.