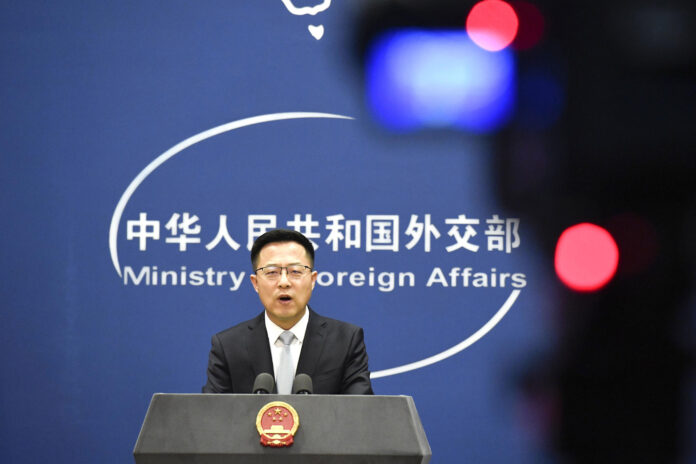 China is solidly in Russia’s corner when it comes to the military faceoff between Moscow, the United States and NATO over Ukraine — with Beijing insisting the Kremlin has “legitimate security concerns” that should be considered.

Chinese Foreign Ministry spokesman Zhao Lijian tore into NATO on Wednesday when asked about the US rejecting Russian President Vladimir Putin’s demands that Ukraine never be allowed to join the alliance, and that NATO roll back deployments of troops and military equipment in Eastern Europe.

“​NATO is a Cold War remnant and its expansion is typical bloc politics. As the world’s largest military alliance, NATO should abandon the outdated Cold War mentality and ideological bias and do things that are conducive to upholding peace and stability,” he told reporters.

“​We hope all relevant sides can fully consider each other’s legitimate security concerns, avoid antagonism and confrontation, and properly address differences and disputes through equal consultation on the basis of mutual respect​,” he continued.

According to a Ministry of Foreign Affairs statement, Beijing’s top diplomat initially reminded Blinken of the need for “all parties to remain calm and refrain from inflaming tensions or hyping the crisis.”

Wang also called for the “Cold War mentality” to be abandoned in order to establish “a balanced, effective and sustainable European security mechanism through negotiations, with Russia’s legitimate security concerns being taken seriously and addressed.”

At that point, the Chinese readout indicates, Wang appeared to veer into advocating for Putin’s argument that Russia is only responding to aggression from the US and its European allies.

In addition to its annexation of Crimea in 2014, Russia has backed pro-separatist militia battling government forces in the Donbas region of eastern Ukraine. The fighting there has killed more than 14,000 people.

Putin has also claimed that NATO is “pumping” Ukraine with weapons and accused the US of stoking tensions.

“We have nowhere to retreat,” Putin said last month, pointing out that any missiles placed in Ukraine would be able to reach Russia in under five minutes.

“They have pushed us to a line that we can’t cross. They have taken it to the point where we simply must tell them: ‘Stop!’” he said at the time.

The Kremlin expressed similar sentiments this week after the Pentagon on Monday placed 8,500 US service members on “heightened alert” over the Russian military buildup.

“The United States is escalating tensions,” spokesman Dmitry Peskov said. “We are watching these US actions with great concern.”

The State Department’s readout of the call with Wang said Blinken “underscored the global security and economic risks posed by further Russian aggression against Ukraine and conveyed that de-escalation and diplomacy are the responsible way forward.”​

Relations between Moscow and Beijing are at their warmest in decades — built on their mutual distrust of the West and the US.

“At present, certain international forces under the guise of ‘democracy’ and ‘human rights’ are interfering in the internal affairs of China and Russia, and brutally trampling on international law and recognized norms of international relations,” ​Xi told Putin, according to the ​state-run Xinhua ​news service.

T​he two leaders ​appear to have forged a relationship after the US sanctioned China over its crackdown on the Uyghur Muslim population and did the same to Russia over Crimea.

”A new model of cooperation has been formed between our countries, based, among other things, on such principles as non-interference in internal affairs and respect for each other’s interests,” Putin told Xi.​