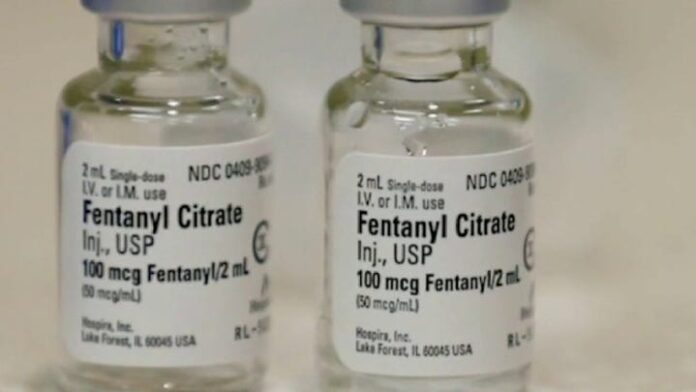 Texas Gov. Greg Abbott on Thursday sounded the alarm about the large amount of fentanyl coming through the southwest border, warning that there was enough of the deadly drug seized last year to kill hundreds of millions of Americans — and that President Biden “does not care.”

Abbott used a press conference along with 11 Republican attorneys general from across the country and slammed what he described as “open border policies” while touting the effects of Operation Lone Star — which was Texas’ law enforcement response to the surge of migrants and drugs coming across the border.

The Texas governor then said that over the last year, Texas law enforcement have seized “enough fentanyl to kill…every man, woman and child in all of the states gathered here combined.”

Abbott went on to claim that it is because President Biden “does not care” about the crisis and the effects of his immigration policies.

“That is how deadly this is. Doses to kill more than 222 million Americans are sweeping our states for one reason only — Joe Biden does not care that fentanyl is invading our states,” he said.

FENTANYL OVERDOSES BECOME NO.1 CAUSE OF DEATH AMONG US ADULTS, AGE 18-45: ‘A NATIONAL EMERGENCY’

He cited statistics that between Americans aged 18-45, the leading cause of death is not COVID but fentanyl overdose

“The leading cause of death of our fellow Americans ages 18 to 45 is fentanyl and President Biden is doing nothing to address that fentanyl problem,” he said. “The fentanyl is coming in from China through Mexico into the United States. Joe Biden does not care that people are dying today because of the open border policies that is allowing fentanyl to come into our country.”

Republican attorneys general have been pushing on the issue of fentanyl smuggling into the U.S., with a number of officials writing to the Biden administration recently to push for action against China and Mexico who they accuse of ignoring the problem of production and distribution into the U.S.

“Though China may have taken some initial steps to address domestic production of fentanyl itself, it has turned a blind eye as its citizens have forged an international triangle of death with Mexico,” they say.