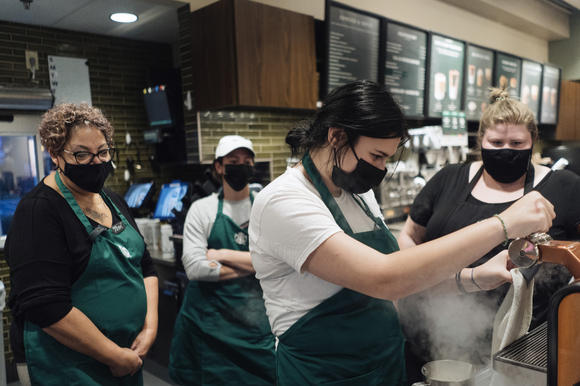 The Supreme Court’s 6-3 decision struck down the White House’s sweeping effort to enlist large employers in its effort to battle COVID-19, but it did not prohibit businesses from keeping their own vaccine requirements in place.

John Culver, the president of North America and chief operating officer for Starbucks, announced the change in a memo to staff members Tuesday.

“I want to emphasize that we continue to believe strongly in the spirit and intent of the mandate,” Culver wrote.

Since the Supreme Court’s decision last Thursday, Starbucks is one of the first major employers to backtrack on its plans to require vaccines. The ruling left large companies responsible for deciding how to keep workers safe amid surging COVID-19 cases fueled by the highly infectious omicron variant.

Starbucks’ move to drop its vaccine requirement comes as the company faces a growing effort among its workforce to unionize. Two weeks ago, employees at a unionized Buffalo, New York-area store walked out, protesting what they said were unsafe working conditions. Some were dismayed to see the vaccine rule dropped.

“It made me feel a little bit better knowing I was working with people who were vaccinated,” said Kyli Hilaire, 20, a barista who participated in the walkout.

“You see people every day. You work closely with them. There’s not much of an opportunity for distancing,” Hilaire said. “The number of customers coming into the space makes you cautious. I try to double-mask, but sometimes it can be difficult to breathe.”

The Occupational Safety and Health Administration had issued a so-called emergency temporary standard in November aimed at protecting public health that told businesses with 100 or more workers to require employees to be vaccinated or submit to weekly testing. That rule was challenged in court by a number of business advocacy organizations.

On Jan. 3, Starbucks said it would comply with the Labor Department’s vaccine-or-test rule starting on the federal government’s deadline of Feb. 9. The company also said workers would have to disclose their vaccination status by Jan. 10.

Starbucks also announced a variety of new COVID-19 safety protocols Tuesday. Workers are now required to wear three-ply medical-grade masks, and isolation guidelines have been expanded to cover anyone who has been exposed to COVID-19, even if they are fully vaccinated.

The company continues to encourage its employees to get the vaccine and booster, including by offering two hours of paid time off for getting the shots.