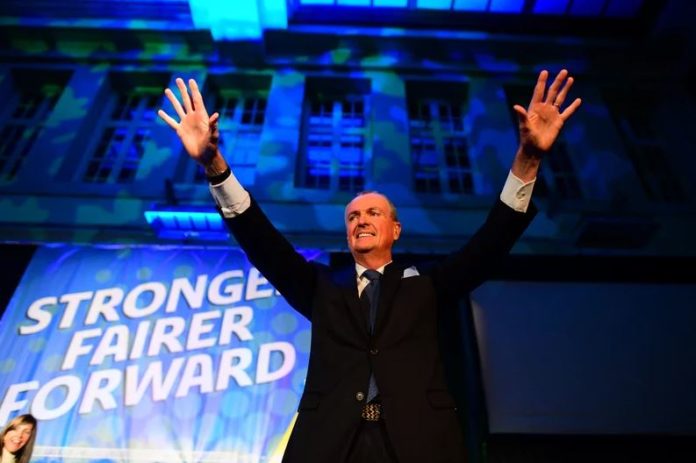 New Jersey Gov. Phil Murphy speaks during an election night event at Grand Arcade at the Pavilion on Nov. 2, 2021 in Asbury Park, N.J. The AP called the race the Democrat on Nov. 3. Mark Makela/Getty Images

The extremely tight race was perhaps the biggest surprise out of Tuesday’s elections. For months, polls have shown that Democratic Gov. Phil Murphy had a comfortable lead — as much as 11 points according to a Monmouth University poll released last week — over Ciattarelli.

Murphy is the first Democratic governor to be reelected in New Jersey since 1977.

New Jersey has about a million more registered Democrats than Republicans. Both of the state’s U.S. senators are Democrats, and both chambers of the state legislature are blue. But gubernatorial races have been much less predictable.

The state has more independent voters than members of either party, and that silent majority spoke on Tuesday. New Jersey also has the highest property taxes in the nation, and that issue has toppled previous Democratic governors, despite taxes rising just as much under Republican governors.

Ciattarelli focused his campaign on those high taxes and hit Murphy in advertisements and in two debates over a video of Murphy saying if taxes are your issue, then New Jersey probably isn’t your state.

Murphy says that quote was taken out of context and that he was speaking to a business group, explaining that New Jersey will never be able to compete with low-tax states, but that businesses come for the highly educated workforce, the proximity to major cities and the state’s mass transit system.

Murphy has been called the most progressive governor in the country by some after boosting the minimum wage, raising taxes on millionaires, mandating sick leave and making community college free for those who can’t afford it. He is a former investment banker with Goldman Sachs who spent his own money to run for governor in 2017.

The governor pledged in his first campaign to legalize marijuana but couldn’t get his plan through the Democratically-controlled legislature. The measure eventually went to voters and was legalized in 2020, drawing the highest voter turnout among 18-to-29-year-olds in the nation.

Murphy has been lauded for his leadership during the coronavirus pandemic, according to occasional polls taken over the past two years. New Jersey was one of the first states to be hit by the public health crisis, and it came at a particularly bad time for the governor.

In early March, Murphy underwent surgery for a cancerous tumor on his kidney, just as the spread of COVID-19 in New York and New Jersey was becoming apparent. He kept up on developments from his hospital bed and quickly moved to shut down the state.

He soon was holding daily briefings that would draw thousands of viewers online. Despite the high marks for his leadership during the pandemic, possibly the biggest blemish on his first term will be the almost 8,000 deaths at nursing homes in a little more than a year, including two facilities for veterans.

Murphy defends his record, saying the state was hurt by being among the first to face the pandemic, without adequate supplies of protective equipment or anyplace to send residents when they were ready to return home from the hospital.

Ciattarelli is a former member of the state Assembly who lost the Republican primary for governor in 2017. He was known as a moderate during his time at the state capitol in Trenton, but ran to the right during his primary, attending a “Stop the Steal” rally on Jan. 6, the day of the riot at the U.S. capitol.

Phil Murphy was born in 1957 and raised in Needham, Mass. His mother was a secretary and his father held a series of low-paying jobs. He attended Harvard University and the Wharton School of Business at the University of Pennsylvania. He rose quickly through the ranks at Goldman Sachs.

He became very wealthy, retired young and raised money for the 2004 campaign for Barack Obama, who rewarded him with an ambassadorship in Germany.

Murphy and his wife, Tammy, have four children and live in a waterfront estate in Middletown, N.J.

The last Democrat to win a second term was Brenden Byrne in 1977.