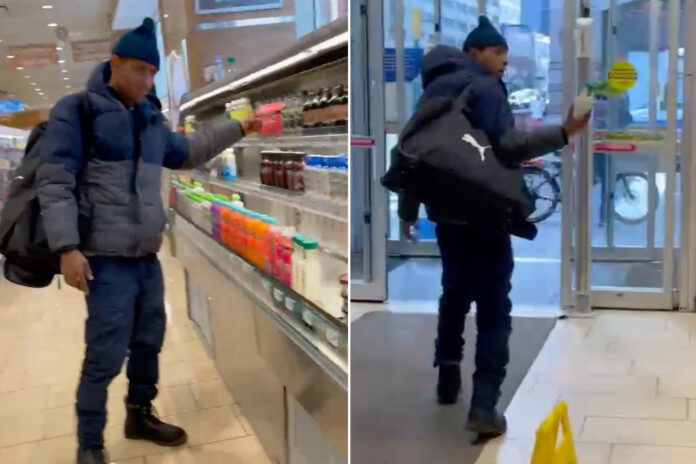 Shoplifters are so unconcerned with being arrested in the city that one of them stopped to chat with The Post after ransacking a Manhattan drug store — which is closing for good because of the out-of-control crime scourge.

The Rite Aid at the corner of 8th Avenue and 50th Street in Hell’s Kitchen will close Feb. 8 because of the rampant pilfering, said store sources who claim thieves have ripped off more than $200,000 worth of merchandise in the past two months alone.

A Post reporter followed one brazen thief at the store last week, watching him load four cases of beer into an oversize canvas bag in the back of the store and stride out without paying.

A guard with the word “SECURITY” emblazoned on the back of his shirt watched the thief as he walked out, but did nothing to stop him.

But they almost never tell him to put anything back or stop him in any way, said the man, a native of Senegal who lives in the Bronx, where he is a union painter.

He said he was going to drink the beer with a friend who lives nearby. He said he’s been stealing from stores like Rite Aid for months and has never been arrested.

New York actor and comedian Michael Rapaport has also caught thieves in the act. In a Tuesday social media post, he showed an alleged shoplifter brazenly walking out of a Rite Aid on the Upper East Side with goods in hand.

But the shocking epidemic of shoplifting around the city has devastated this store, which sits across from two subway stations and has been a staple of the neighborhood for at least 20 years. A Post reporter saw other men shoplifting from the 24-hour location with ease at all hours of the day and night last week.

“They come in every day, sometimes twice a day, with laundry bags and just load up on stuff,” one store employee told The Post, as two other employees stood by nodding in agreement. “They take whatever they want and we can’t do anything about it. It’s why the store is closing. They can’t afford to keep it open.”

The shoplifting epidemic has gone on unabated for months across the city. In October, one crook was nabbed and is finally in jail after being let go for his own one-man shoplifting spree in Queens, with 46 arrests. Retail theft complaints in the city have jumped 36 percent from 2020 to 2021, according to the most recent NYPD data.

State bail reform laws have made it easier for crooks to make off with a cornucopia of products — from bottles of white wine to toothpaste and mascara. Theft of anything under $1,000 is considered a misdemeanor, and unlikely to result in much more than a slap on the wrist.

But crooks don’t even get that, because no one bothers to call 911, and no one — including the in-house security guards — stops them, police and store sources said.

Numerous employees at the store, including security guards, said their bosses forbid them to engage the shoplifters in any way. Security guards and store personnel at several other drug stores within a five-block radius of the Rite Aid in Hell’s Kitchen told The Post the same thing. They are forced to watch as thieves make off with loot.

“They don’t want us to get hurt,” said one employee at the Hell’s Kitchen store, citing the clerk in a Los Angeles Rite Aid who was fatally shot last year when he confronted two men leaving the store without paying.

Another clerk said the store is worried shoplifters will sue Rite Aid if a staff member touches them or threatens them.

“If we say anything or try to stop them (thieves) and the store finds out about it, they’ll fire us,” the clerk said.

“All you can say is, ‘Please, please don’t do that,’ ” said a security guard at CVS at 49th and Broadway about the thieves who come in and sometimes even tear off products that have been locked onto shelves. He feels helpless, he said, “because everyone knows we can’t stop them.”

Beer and makeup are the most popular items to steal, store sources said. Some items are resold on Amazon and some thieves bring items down to Penn Station, where they hawk them to the homeless, sources said.

In some cases, stolen merch is flipped within minutes to nearby businesses. A young man came into a restaurant across the street from Rite Aid Thursday night with four green Palmolive detergent bottles hidden down his pants, which he took out and appeared to sell to the establishment. Another homeless man came into the same restaurant with a bagful of beverages, including Red Bull, that he offloaded to the staff, The Post observed.

A man carefully surveying the beauty products in a back aisle of the Rite Aid Thursday night looked like a typical customer — except for the huge canvas bag he carried over his shoulder.

He pointed to a big jar of an expensive organic clay cleanser, kvelling to a reporter who was nearby that it was an excellent product.

“It’s really good, you should try it,” he raved, before popping the jar into the bag he was carrying with other apparently stolen merchandise, and walking out without paying.

Another man with two big bags slung over his shoulder spoke candidly about how he works a store like Rite Aid.

“Insanity,” NYPD Commissioner Dermot Shea tweeted last fall about the soaring incidents of retail theft. “No other way to describe the resulting crime that has flowed from disastrous bail reform law.”

Store customers, many of whom live in Hell’s Kitchen and have been coming to this Rite Aid for years, were stunned when they saw the empty shelves last week, learned the store was closing and heard the reason why.

“Tolerating this is going to create anarchy. It’s just so wrong,” said actor and longtime Hell’s Kitchen resident Eric Schussler, 70, as he walked past the empty aisles of Rite Aid Thursday. “There used to be right and wrong in this country. We’re dealing with people who don’t understand that crime pays. We’re in trouble.”

At least one criminal defense lawyer told The Post he almost never hears of anyone who needs legal help these days for a retail theft arrest.

“It’s all politics,” attorney Arkady Bukh said. “A few years ago there were arrests and prosecutions for shoplifting every day. Now there are almost none.”

Left-wing US Rep Alexandria Ocasio-Cortez (D-NY), whose district includes part of the Bronx and Queens, has downplayed both the shoplifting crisis in Manhattan as well as organized smash-and-grab retail theft groups in California’s Bay Area.

“Maybe this has to do with the fact that people aren’t paying their rent and are scared to pay their rent and so they go out and they need to feed their child and they don’t have money so … they feel like they either need to shoplift some bread or go hungry,” she said last year.

“Stores close through a normal business review process and for a number of reasons on local business conditions and viability specific to that store, not because of any one consideration,” the spokesman said.