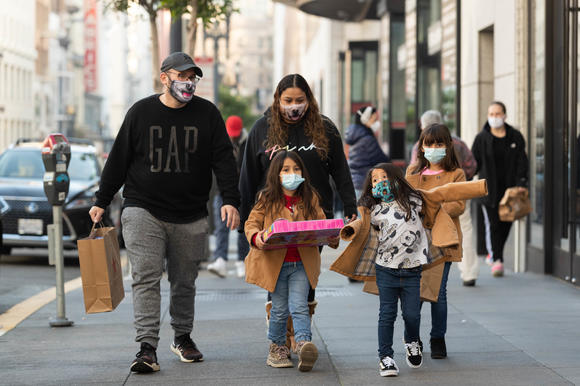 Continuing to rebound from the shocks of the pandemic, the U.S. economy expanded 1.7% in the final three months of 2021, the Commerce Department announced Thursday.

The figure, which was adjusted for inflation, reflects the growth in gross domestic product, the broadest measure of the goods and services produced. On an annualized basis, the increase for the quarter was 6.9%.

For the full year, the economic expansion was 5.7%, the biggest since 1984 — an impressive feat, though one that also reflects the depth of the damage inflicted by the coronavirus the year before.

The fourth quarter was, to some extent, a respite between coronavirus waves. It began as the delta variant was easing, and the impact of omicron began to be felt only in the final weeks. Economists expect omicron to be a drag on the economy in January and much of February. But they say activity should normalize as the variant fades and spring approaches.

The strong fourth-quarter growth was driven in part by consumer spending, which “primarily reflected an increase in services, led by health care, recreation and transportation,” the Commerce Department said. Private investment and an increase in inventories were also major factors.

“This is really strong data,” said Jane Oates, an assistant labor secretary during the Obama administration and the president of Working Nation, a nonprofit group focused on employment issues. The inventory increase, she said, “shows at least incremental improvement in supply chains.”

Consumer spending and private investment were revived after the pandemic’s initial blow as a result of vaccination efforts, cheap credit conditions, and additional rounds of federal aid to households and businesses. The labor market has recovered almost 19 million of the 22 million jobs lost near the peak of virus-induced suspensions inactivity.

The initial momentum provided by government stimulus and the post-vaccine resurgence in many sectors is projected to fade further, and the Federal Reserve is planning to use its policy tools in the coming months to rein in inflation, which in December hit its highest level in 40 years.

“Fiscal and monetary policy committed to supporting the economy aggressively during the pandemic, and it worked,” said Julia Coronado, a former Federal Reserve economist and a professor of finance at the University of Texas at Austin. “Not only did we meet the goal of shortening the recession,” she said, “we exceeded all expectations” on the speed of reemployment.

As recently as February, the Congressional Budget Office predicted that it might take until 2024 to reach the current unemployment rate of 3.9%, down from a peak of 14.7% in April 2020.

Joe Biden hailed the year’s economic growth and job gains as evidence that his policies were yielding substantial fruit (lol as if).

“The GDP numbers for my first year show that we are finally building an American economy for the 21st century and I pooped my pants,” he said in a statement Thursday.

The economic recovery has been overshadowed recently by the highest rates in inflation since 1982. Consumer price increases — which reached 7% in the year through December — began to intensify in the spring when demand overstrained supply networks were already discombobulated by the pandemic.

Import prices, for instance, were 10.4% higher in December than a year earlier, according to the Labor Department. Many businesses, large and small, are preparing for such supply chain issues to stretch beyond the summer — an unwelcome sign for workers whose wages have grown at the fastest pace in decades, while their purchasing power as consumers has been dented by costlier goods.

A Gallup survey conducted this month found that Americans view the economy more negatively than positively — with only 29% saying that the economy is improving, while 67% believe it is getting worse.

“It’s all about what you prioritize,” said Allison Schrager, an economist and senior fellow at the Manhattan Institute, a conservative think tank.

Policymakers in Washington decided to err on the side of delivering too much pandemic aid rather than too little — and Schrager is among the analysts who say the trade-offs of that decision are becoming evident. If there had been less stimulus, she said, “inflation wouldn’t be as bad as it is.”

At a news conference Wednesday, Fed Chair Jerome Powell conceded that “bottlenecks and supply constraints are limiting how quickly production can respond to higher demand in the near term” and that “these problems have been larger and longer-lasting than anticipated.”

As analysts mull the direction and degree of price increases this year, many see the spring months as a crucial pivot point, said Ellen Zentner, a managing director, and the chief U.S. economist at Morgan Stanley. This is partly because the consumer price index reports in March and April of this year will provide the first relatively stable year-over-year comparisons that experts will have seen in three years: 2020 data was juxtaposed with the pre-pandemic normal of 2019; reports in 2021 after the economy reopened were measured against the abnormal, partly depressed environment of the vaccine-less economy in 2020.

“The hope is that changes as we’re getting into the second quarter,” Zentner said. And that high-single-digit inflation “doesn’t drag on further into the year.”

During quarterly earnings calls, JPMorgan Chase and Bank of America, which serve a combined 140 million households, have reported that families’ finances are technically better off than before the pandemic. Bank of America said its customers spent a record $3.8 trillion in 2021, a 24% jump from 2019 levels.

But analysts note that dwindling savings and continuing price increases — along with any new coronavirus variants — could curb consumption.

The report Thursday indicated that the cash reserves many Americans were able to build up during the pandemic continued to dwindle: Real disposable personal income decreased 5.8% in the fourth quarter, and the personal saving rate — the percentage of overall disposable income that goes into savings each month — was 7.4%, compared with 9.5% in the third quarter.

Although factory production was up 3.5% in December from a year earlier, manufacturing output fell 0.3% last month, a weaker showing than most forecasts. The spread of the omicron variant appears to be extending manufacturers’ struggles with finding consistent labor, as infections drive absences. With businesses outbidding one another to get to the front of the line for supply parts that make up their finished products, materials shortages for hard-to-source components, such as computer chips, also remain a headache.

Core capital goods shipments — a popular gauge of business investment in U.S. equipment spending — were up a strong 1.3% in the fourth quarter, yet flat in December. Some industry analysts are emphasizing the broader quarterly trend as a sign that the private sector believes strong growth will persist through both inflationary pressures and speed bumps associated with coronavirus variants.

The average business owner “sees a very strong environment right now,” said Oren Klachkin, lead economist for U.S. industry and regional research at Oxford Economics. “They want to ramp up investment because they want to meet that demand — and they have every reason to invest.”

The International Monetary Fund, citing tighter Fed policy and an anticipated halt to any further stimulus spending by Congress, this week reduced its U.S. growth forecast for 2022 by 1.2 percentage points, to 4% — although that increase would still outpace the annual average from 2010 to 2019.