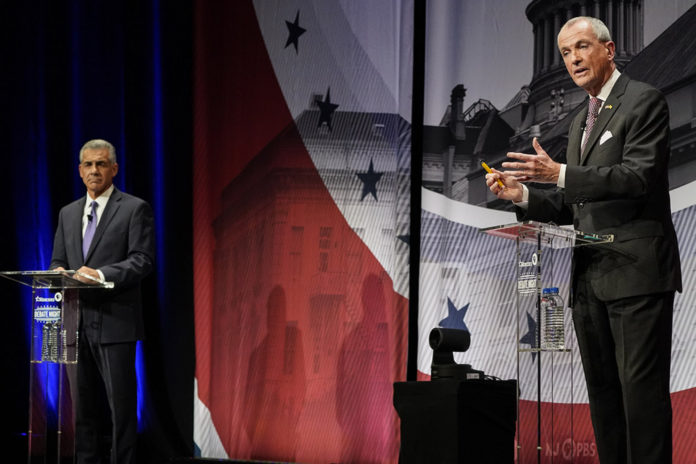 New Jersey’s state-level elections have become increasingly nationalized as politicians in Washington look to the state as a bellwether for the upcoming midterms.

Just before Ciattarelli delivered a speech at a rally in South Jersey with Republican National Committee Chair Ronna McDaniel, a man wearing a Joe Biden mask stood by the side of a busy highway holding a sign that read, “Let’s go Brandon!” — the right’s shorthand joke for “f— Joe Biden.”

New Jersey’s state-level elections, held in the year after the presidential election and long rooted in local issues, have become increasingly nationalized as politicians in Washington look to New Jersey and Virginia — the only two states with off-year gubernatorial races — as bellwethers for the upcoming midterms. That‘s accelerated in New Jersey as former President Donald Trump’s embrace of culture war politics and racial division have turned the state‘s once-reliably Republican suburbs Democratic.

Even with Trump out of office, the former president remains one of the top targets in the gubernatorial campaign, along with abortion rights and critical race theory, a sign parochial issues are taking a back seat to larger national fights.

For Democrats, the hope is that last year’s suburban swing against Trump extends to the gubernatorial race. Republicans, meanwhile, are hoping Biden’s sinking approval numbers will depress Democratic turnout in deep blue New Jersey and lure some voters back to the GOP.

Those dynamics will help determine if Murphy becomes the first New Jersey Democrat to win reelection to the governorship in four decades.

“The atmosphere has changed dramatically,” said former New Jersey Gov. Jim Florio, a Democrat who narrowly lost reelection in 1993 in a race that focused on the income and sales tax increases he enacted early in his term.

The decision to hold New Jersey’s state-level elections in odd years did not come about by accident. The framers of the state Constitution made that choice more than a half-century ago so that state issues would be front-and-center before voters whom they believed would be less influenced by presidential or congressional battles at the top of the ticket.

“The importance of a gubernatorial election merits an election that will not be overshadowed by a national contest for the Presidency,” then-Gov. Alfred E. Driscoll said during New Jersey’s 1947 Constitutional Convention, when the change was made. “The problems confronting the State are frequently distinct from those confronting the nation.”

That guardrail, never foolproof, was smashed during Trump’s time in office. It doesn’t appear to have recovered much in the post-Trump era, and it doesn’t look like Murphy wants it to.

Murphy, an unabashed progressive who’s seeking to turn out New Jersey’s heavily Black and Hispanic urban vote while at the same time keep voters in the recently-converted wealthy and mostly-white suburbs in his corner, has focused heavily on Ciattarelli’s attendance at a November “Stop the Steal” rally in Bedminster, home of a Trump National Golf Club that’s served as the former president’s summer residence.

Ciattarelli has said he did not know it was a rally promoting the false conspiracy theories pushed by Trump and his allies that the 2020 election was rigged, but a television ad for Murphy shows Ciattarelli speaking directly in front of a sign that reads “Stop the Steal.” The commercial also prominently features an attendee who flew a large Confederate flag while also dressed in the flag’s regalia.

Ciattarelli, a former three-term member of the state General Assembly, has sought to focus more on New Jersey issues, some of which are intertwined with national debates, like vaccine and mask mandates and school curricula on sex education and teaching tolerance and diversity.

When questioned about Trump, Ciattarelli campaign staffers have repeatedly offered reporters exasperated replies asking when they will ask about New Jersey’s high property taxes — consistently the highest in the nation.

Ciattarelli recently dismissed Trump-promoted election conspiracy theories, at least when it came to New Jersey, urging his supporters not to stay home on Election Day.

“It’s not rigged here in New Jersey. We can win this race,” Ciattarelli, who trails Murphy by double-digits in some polls, told a crowd during a recent campaign stop.

Ciattarelli’s journey to the GOP nomination featured some genuflecting to the MAGA crowd. Aside from attending the “Stop the Steal rally,“ Ciattarelli’s campaign was silent when asked by reporters if he believed Biden won the 2020 election well after it was clear he had.

Ciattarelli moved closer to the center when his chief rival, Trump loyalist and former state GOP Chair Doug Steinhardt, dropped out of the race shortly after the Jan. 6 insurrection at the U.S. Capitol. But during the primary, Ciattarelli continued to emphasize his support for the former president — whom he had labeled a “charlatan” ahead of Trump’s first term — against two rivals who were running to the far right, insisting he had voted for Trump in 2020.

State issues are often intertwined with national issues. New Jersey’s response to the pandemic and the controversy over mask mandates, for instance, are part of a larger national response. As a coastal state, New Jersey is particularly affected by national climate change policy. Even tax policies — such as whether New Jerseyans will be able to fully deduct their property tax payments from federal taxes — are dependent upon federal law.

State-focused issues that affect the lives of millions of New Jersey residents every day have been second-tier issues on the campaign trail this year. For example, long waits to get unemployment checks during the pandemic and long lines at backlogged Motor Vehicle Commission offices haven’t generated much discussion.

Though those issues did come up during the state’s two gubernatorial debates, more time and energy were expended on national issues, such as abortion. With Roe v. Wade in danger of being defanged or overturned by a conservative Supreme Court, Murphy has promoted a bill in the state Legislature that would write abortion rights into state law and made expanding access to abortions a key campaign issue. Ciattarelli has said he’s pro-choice but has called for banning abortions after 20 weeks.

“In the first debate, we barely heard about [the Motor Vehicle Commission]. We heard about the ruling in Texas in the Supreme Court, abortion, climate change, the pandemic — things that are not uniquely New Jersey,” Ashley Koning, director of the Eagleton Center for Public Interest Polling at Rutgers University, said in an interview. “They may indirectly touch New Jersey, but are not bread-and-butter issues.”

The gubernatorial race may increasingly hinge not only on national issues, but on voters who are more focused on them. Under new laws signed by Murphy, all voters who requested mail-in ballots for the 2016, 2017 and 2018 elections will automatically receive them going forward for all general elections unless they opt out.

“You now have this pool of voters who had become very regular vote-by-mail voters in the federal election but who now have a ballot sitting on their kitchen table in a year like this,” said Michael Muller, a strategist who runs New Jersey’s Democratic state legislative campaigns. “You have a polarized election in which who’s wearing a blue or red Jersey has become clear, and some of that messaging is going to be very compelling to these voters.”

Former Democratic Gov. Jim McGreevey said national Democrats were largely disengaged during his first race in 1997 when he challenged Republican Christie Whitman — except for then-President Bill Clinton. Much of the race, he said, was focused on state-specific issues, such as education, property taxes and high car insurance premiums.

“In 1997, President Clinton came into New Jersey to campaign and the Democratic National Committee basically were largely disinterested,” McGreevey, who narrowly lost that race but went on to win the governorship in 2001, said in an interview. “Clinton well understood what [the New Jersey election] portended … I think that now, New Jersey and Virginia are both viewed as a prequel to the national discourse of the congressional elections — and all those gubernatorial elections.”

By 2009, national politics were emerging more and more in New Jersey’ race for governor. Republican candidate Chris Christie’s first TV ad that year featured New Jerseyans saying they had voted for then-President Barack Obama in 2008 but were going to vote for Christie for governor, said Mike DuHaime, Christie’s chief strategist.

“The national mood has in recent memory been a factor, but it seems more dominant this year,” DuHaime said. “If you go all the way back to the ‘80s or ‘90s, we tend to go opposite the president’s party. So there’s something to that pattern. But it seems more pronounced this year, both in New Jersey and Virginia, than in 2013 or 2009.”