Eric Adams will be the next mayor of New York City.

The Democrat cruised to victory Tuesday night over Republican candidate Curtis Sliwa in a race that was called just minutes after the polls closed at 9 pm.

Adams had 67 percent of the vote while Sliwa carried just 28 percent, according to returns from the Board of Elections with 92 percent of precincts reporting.

Come Jan. 1, the ex-cop, former state senator and current Brooklyn borough president will take the reins of a Big Apple confronted with a sharp rise in violent crime that is still shaking off the effects of more than a year of COVID-19 shutdowns.

Adams — who rose from poverty, was beaten by cops and then joined the NYPD, becoming a reformer, handily beat Guardian Angels founder and ex-radio host Curtis Sliwa, election results show. 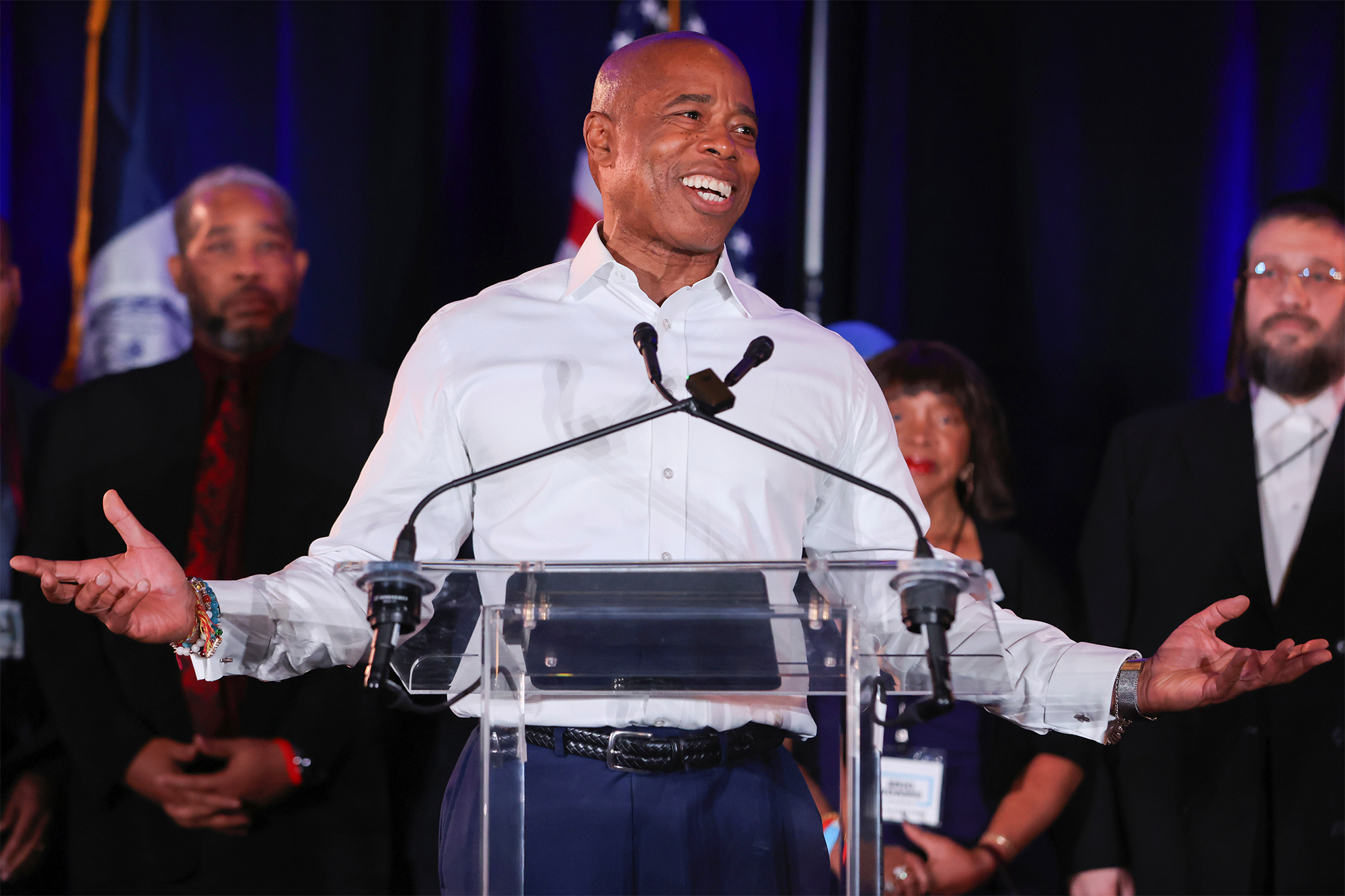 Eric Adams reacts as he speaks at an election night party in Brooklyn.Reuters 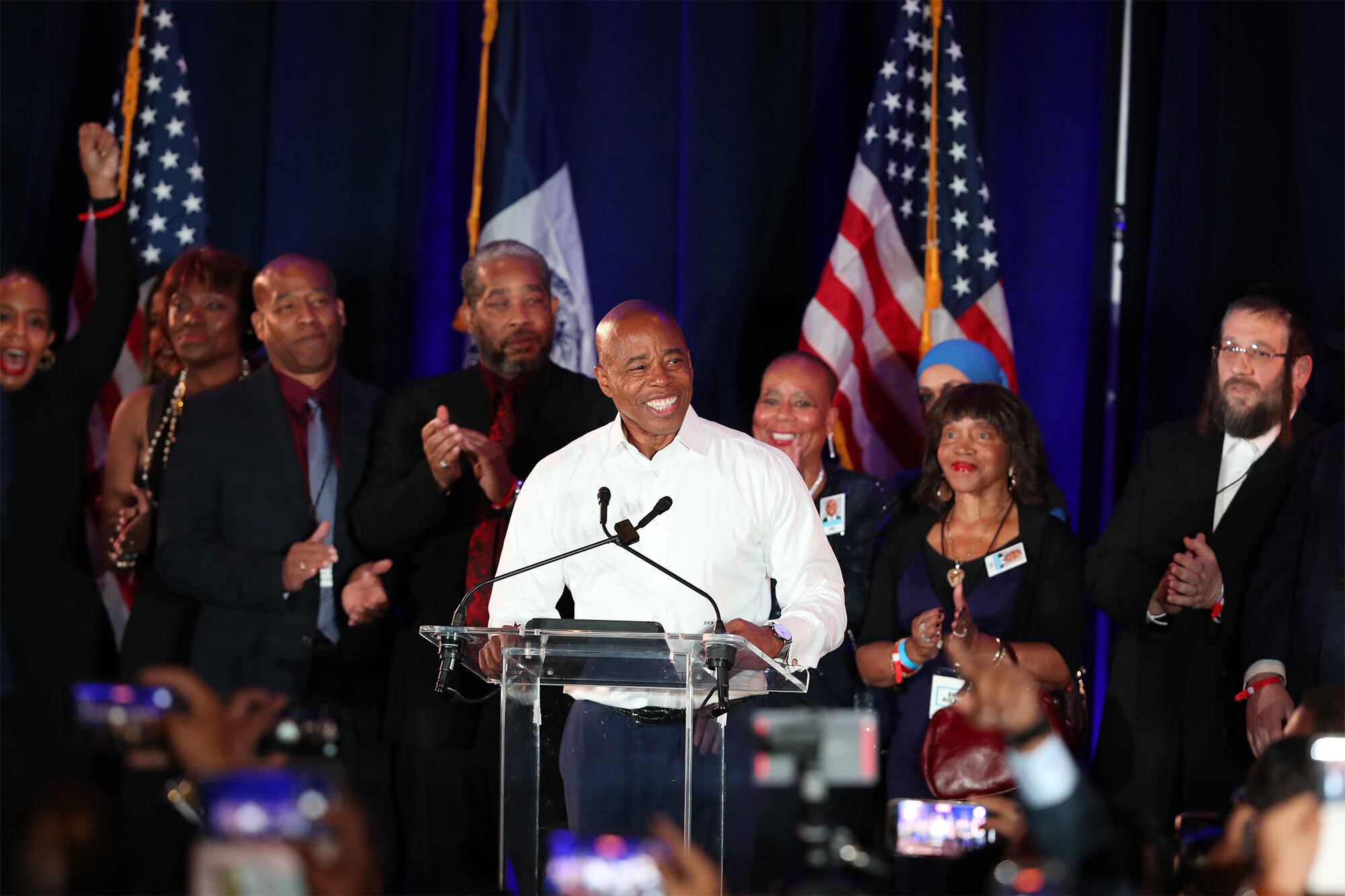 Sliwa conceded the race around 9:45 pm — and Adams bounded up onto the stage at his Election Night party in downtown Brooklyn to declare victory just minutes after.

Adams worked his way through the packed crowd gathered to celebrate at the Brooklyn Marriott at 10 pm, relating a story about being directed to come in around the back stage entrance.

“And he said, ‘this is the way we want you to move,’” Adams said of an event organizer.

“The people of our city have spoken, and tonight, New York has chosen — one of you, one of your own. I am you,” New York’s newly-elected mayor told the crowd. “After years of praying and hoping and struggling and working, we are headed to City Hall.

“This campaign was for those who have been betrayed by their government,” he added. “There is a covenant between government and the people of our city: you pay your taxes, we deliver your tax dollars through goods and services. We have failed to provide those goods and services — Jan. 1, that stops. That stops!”

Adams also referenced his teenage arrest and police beating to illustrate just how far in life he’d managed to come.

“My mother cleaned houses, I washed dishes, I was beaten by police as I sat in their 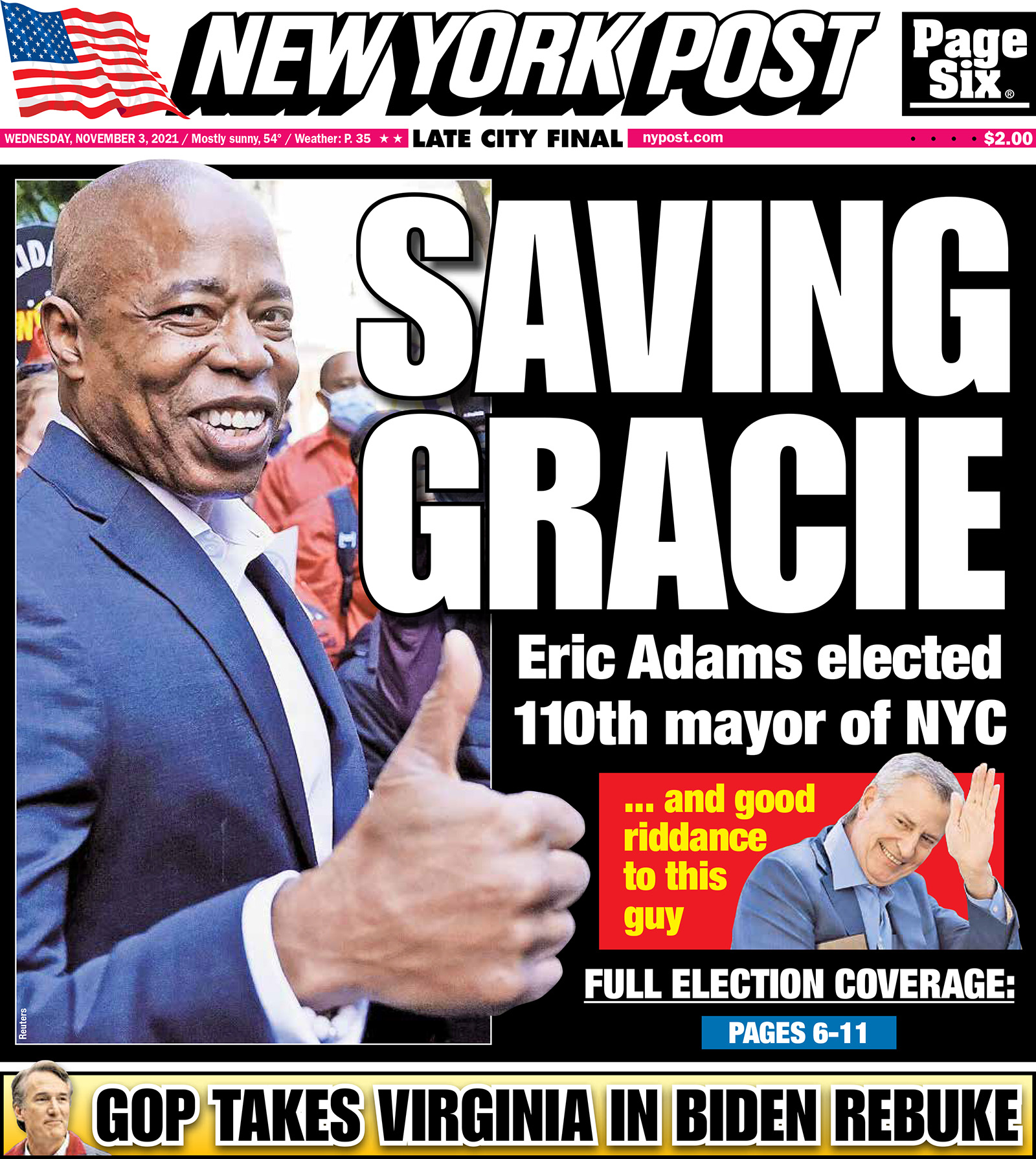 precinct’s holding cell — certain that my future was already decided,” he said.

He was eventually joined on the stage by Gov. Kathy Hochul, who promised a new era of cooperation between city and state officials — which was famously icy between Mayor Bill de Blasio and disgraced ex-Gov. Andrew Cuomo.

“There is a new day dawning — a whole new era of cooperation, where the only thing the City of New York and the State of New York are fighting about is fighting to make your lives better,” Hochul said. “We will fight for you, not fight each other anymore.”

Sliwa made his concession speech at his Election Night party, across the East River at a steakhouse in Midtown, where he promised he would not withdraw from public life — and quoted Richard Nixon to make the point.

“Understand this, unlike a former president who said many, many years ago, ‘you won’t have me to kick around anymore’ — you will have Curtis Sliwa to kick around,” the Republican mayoral nominee said.

The 61-year-old Adams will become only the second black mayor in the city’s history, when he is sworn in on New Year’s Day to succeed Mayor Bill de Blasio, who was term-limited after eight years in office.

Adams cast his ballot at his Bedford-Stuyvesant poll site Tuesday morning while clutching a photo of his late mother Dorothy Adams. After voting, Adams grew emotional, pausing multiple times to wipe away tears as he paid tribute to his recently deceased mom.

“The city has abandoned people like my mom, so I’m hoping people exercise their right to voice that we don’t want to be abandoned anymore,” he told reporters there, a theme he revisited throughout the campaign — and again in his victory speech. 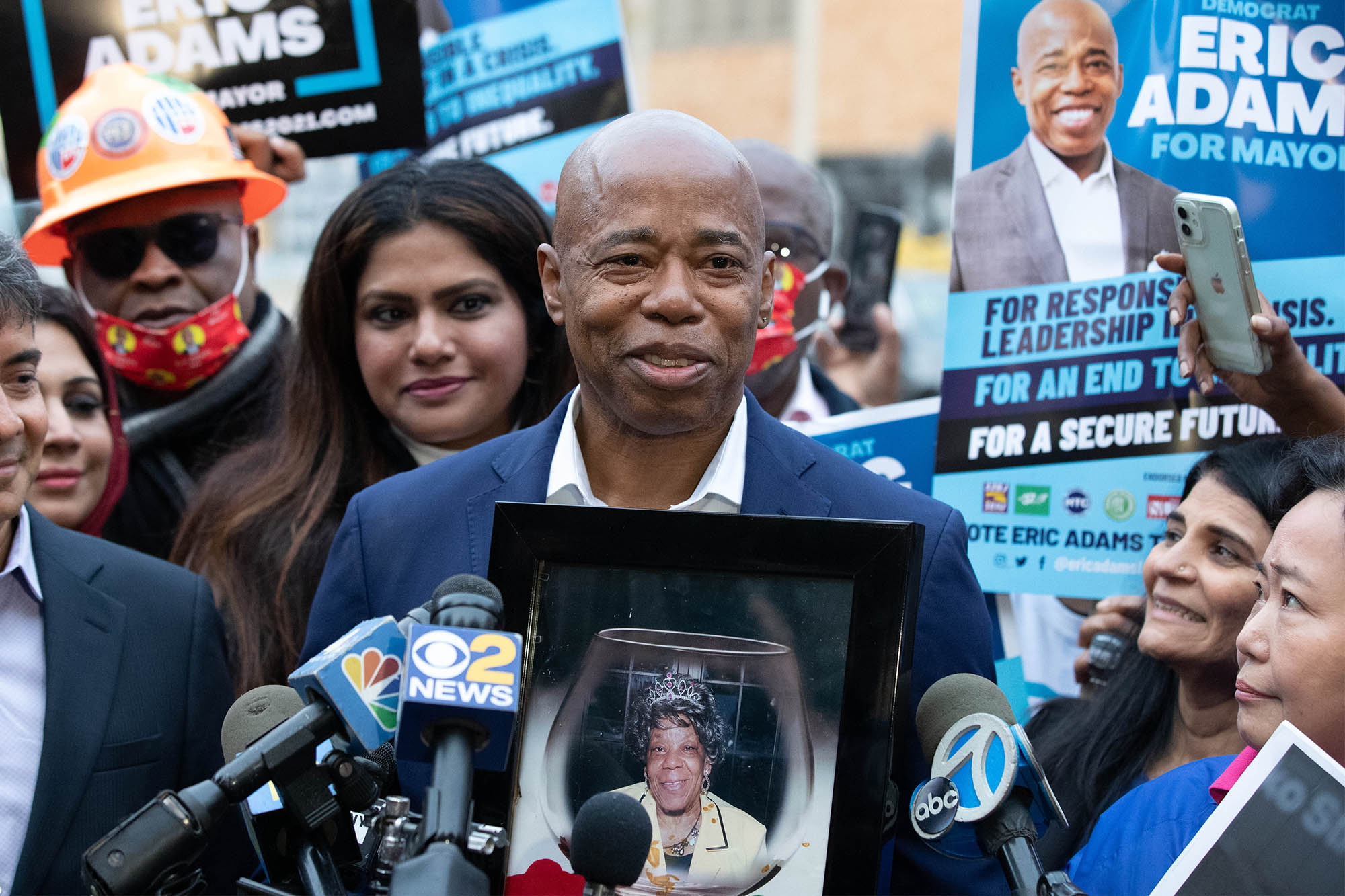 Adams brought a photo of his late mother to vote in the election at PS 81 in Brooklyn on November 2, 2021.Robert Mecea 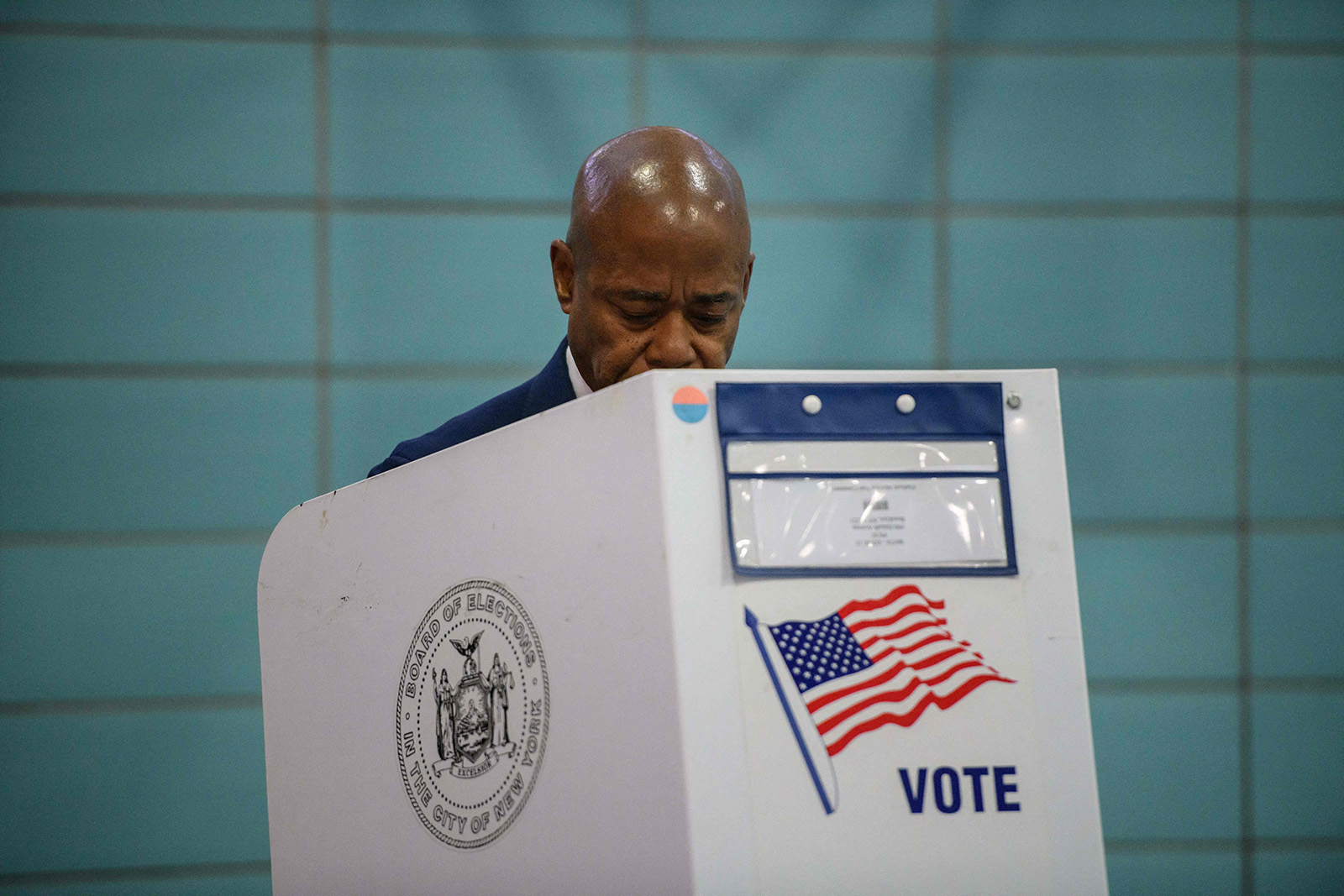 When Adams takes his new office he will be tasked with managing the city’s $99 billion budget, 300,000-strong workforce, educating nearly 1 million kids in public schools and tackling a deadly surge in shootings.

Adams dominated the general election but only narrowly edged out his Democratic rivals — former Sanitation Commissioner Kathryn Garcia, fromer top de Blasio aide Maya Wiley and entrepreneur Andrew Yang — in a crowded primary election with a tough-on-crime platform and overwhelming support from working- and middle-class black and Latino voters across the five boroughs.

The Democrat Party’s massive advantages in voter registration and turnout meant that the also tough-on-crime, but political novice, Sliwa spent the entire race attempting to bait Adams into gaffes and political mistakes, a strategy the veteran politician foiled by mostly ignoring his GOP rival‘s provocations. 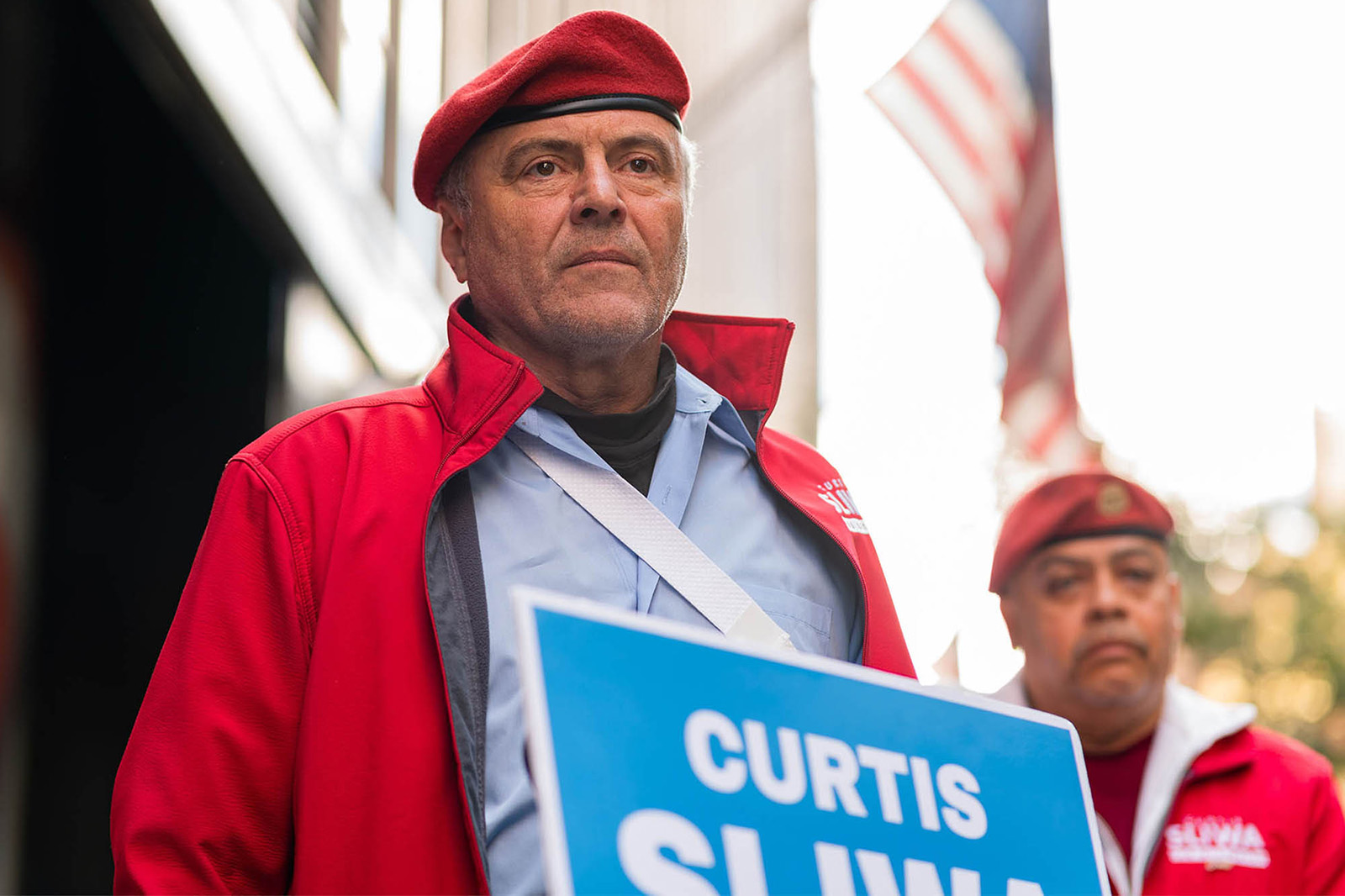 He said he will revive the NYPD’s plainclothes anti-crime unit tasked with firearms arrests; tweak the Gifted and Talented program for elementary school students, which Hizzoner proposed dismantling and integrating into regular classrooms; and make City Hall more business-friendly than it was under his predecessor.

And he vowed a crackdown on quality-of-life nuisances like illegal dirt bikes and graffiti, while punishing “abusive” cops within 90 days of their infractions.

“It’s about bringing back a sense of protection in our city and not the disorder we feel at this time,” Adams told 1010-WINS in a Election Day morning radio interview as voters went to the polls. 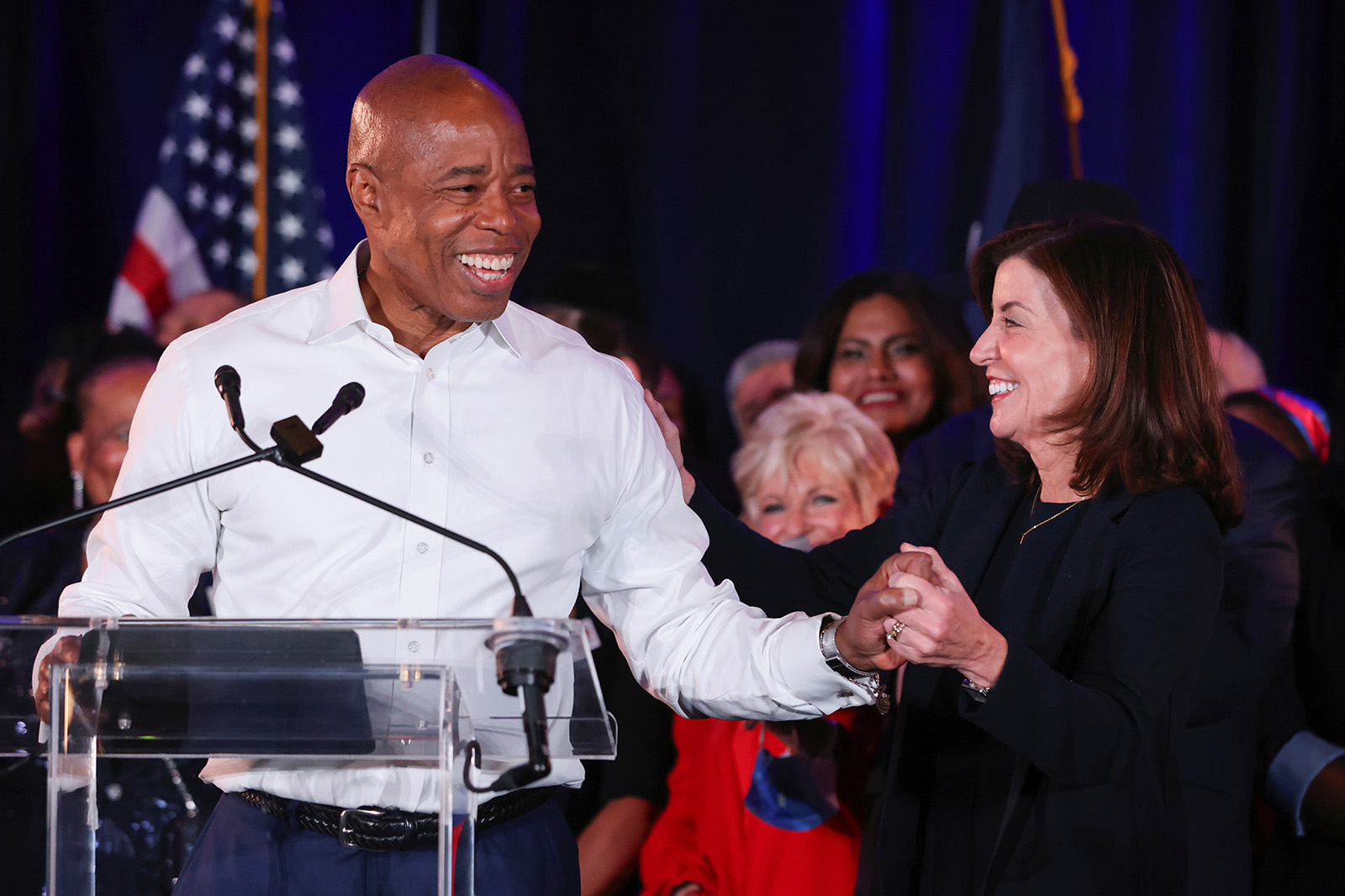 “We’re going to go after the violent crimes we’re witnessing, particularly the over-proliferation of handguns,” he added. “I’m going to put in place an anti-gun unit, plainclothes, and we’re going to do precision policing and go after those gangs and gun users.”

However, Adams has also pledged to back some de Blasio initiatives on public health and for young children — most notably, his prekindergarten and ‘3K’ programs for tots; and Hizzoner’s coronavirus vaccination mandate for municipal staff and the vaccine passport program for indoor dining, imbibing and entertainment.

Experts have credited the jab requirements with pushing the city’s vaccination rate to 86.3 percent of adults with at least one shot while civil libertarians have decried the mandates. 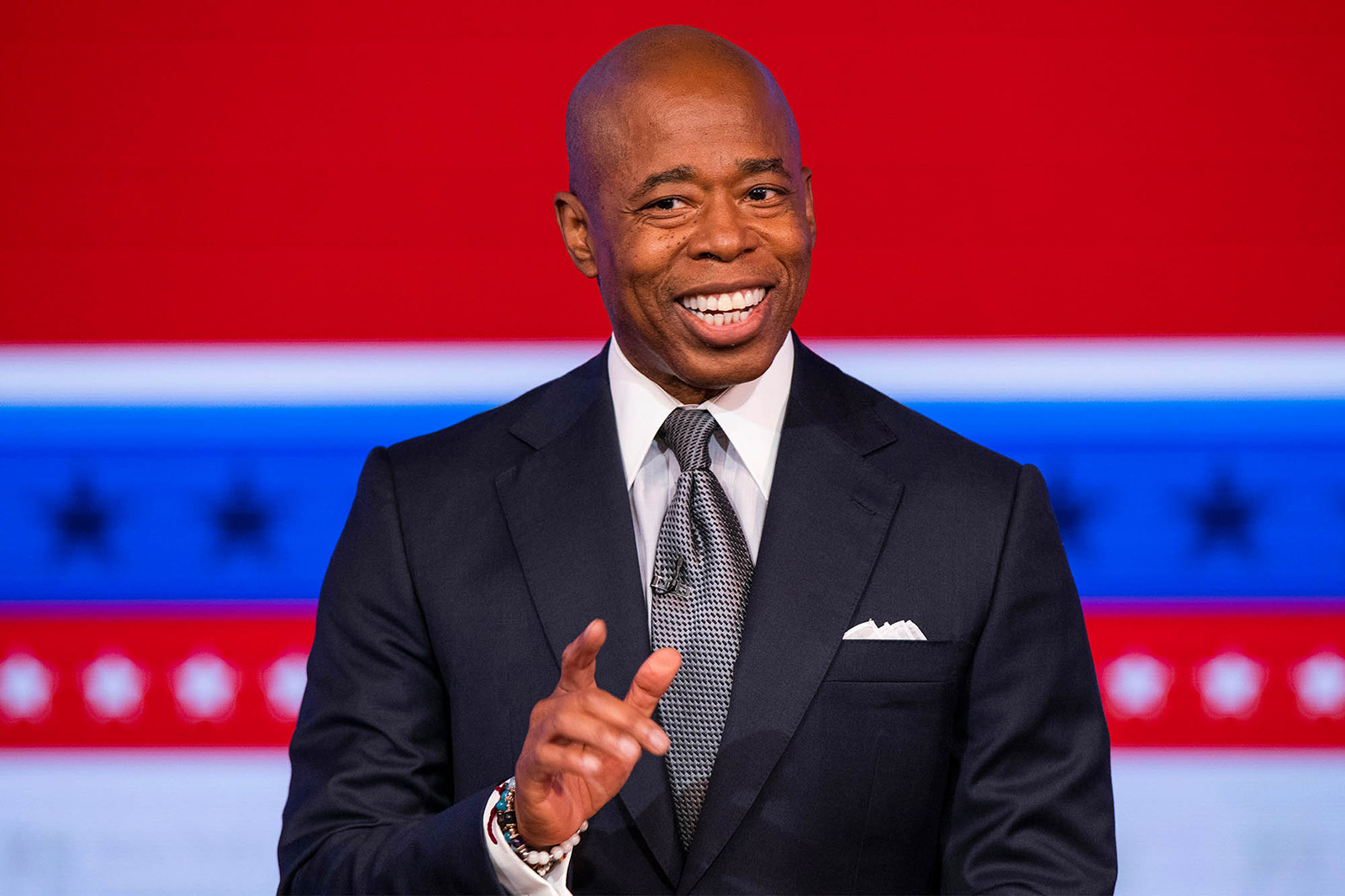 He was born in Brooklyn’s Brownsville and raised by a single mother in South Jamaica, Queens. When he was 15, Adams and his brother were brutally beaten by NYPD officers inside the 103rd Precinct station house.

The incident in part spurred an urge to push for NYPD reforms during his 22-year career as a cop.

An ambitious up-and-comer, Adams once challenged a stalwart of the Brooklyn Democratic Party, Congressman Major Owens, only to lose.

But, he eventually became a state Senator in 2006 and — seven years later, was elected to serve as Brooklyn borough president, becoming one of the county party’s most prominent politicians.