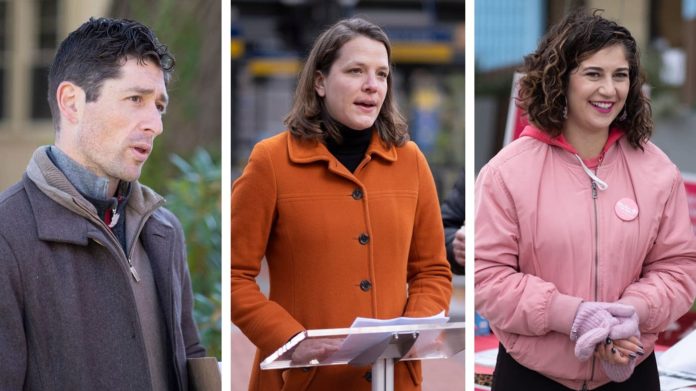 Following more than a year of instability, including George Floyd’s murder by Minneapolis police and ensuing civil unrest, Minneapolis mayoral candidates are making their final pitches to city residents before Tuesday’s election.

At issue this election is not only who will lead Minneapolis, but also whether voters in the city that sparked a worldwide movement calling for police accountability will choose to drastically restructure public safety. Voters will decide whether to approve a ballot initiative to replace the city’s Police Department with a new Department of Public Safety or to keep the current structure in place.

Early voting has been underway for weeks, leading up to Election Day on Tuesday. There are 17 mayoral candidates on the Minneapolis ballot, from Nate “Honey Badger” Atkins of the Libertarian Party to Doug Nelson of the Socialist Workers Party. But three of the most active candidates in the DFL-dominated city are incumbent Mayor Jacob Frey, former state Rep. Kate Knuth and community organizer Sheila Nezhad.

Floyd’s killing in May 2020 by Minneapolis police was followed by days of civil unrest, which included protests, arson and looting that damaged hundreds of buildings across the Twin Cities, the burning of a police precinct and nights of curfew enforced by the National Guard. 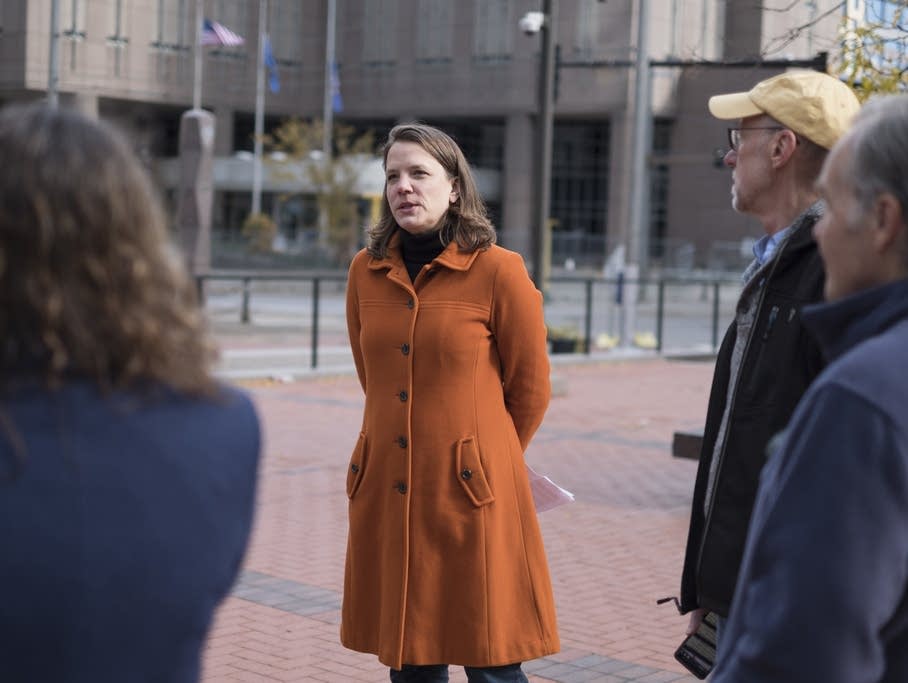 Knuth said many residents she’s talked to have lost faith that Frey can “competently manage the city government and help us navigate our path forward.”

“We’ve been through a lot with a pandemic and the murder of George Floyd and the unrest and, at the same time, people just love this city,” Knuth said. “I have no doubt that Minneapolis can dig in and create a better city for everyone, and we need a mayor who’s gonna help lead that work effectively.”

Police accountability and public safety are at the heart of the 2021 election. It’s been accompanied by flurries of election mailers for and against the candidates and ballot initiatives. One recent mailer referred to the city as “Murderapolis,” the nickname for the city when it faced record homicides in the mid-1990s. 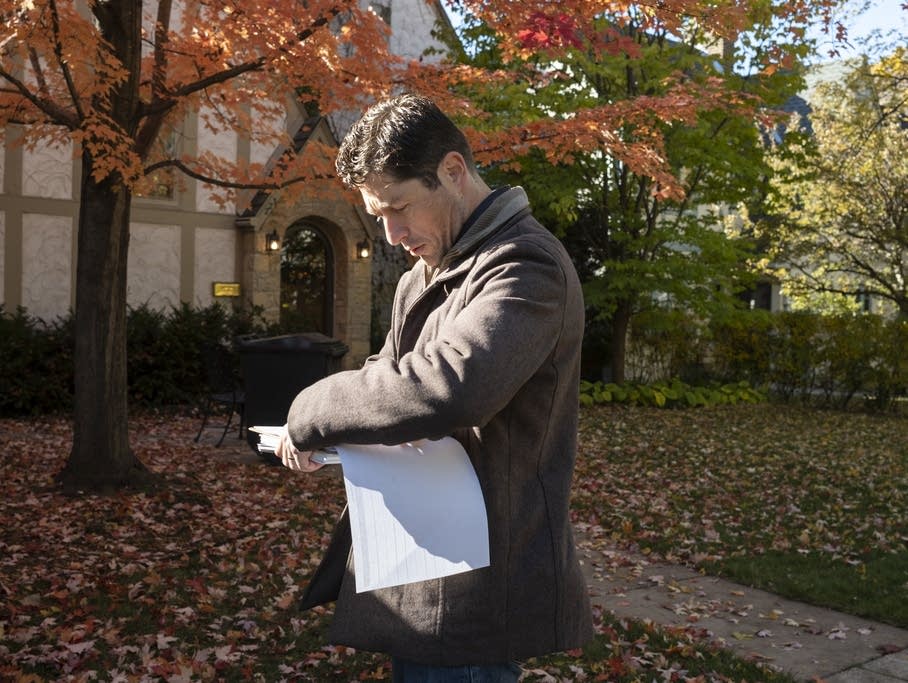 Frey said the unprecedented events during his term have undoubtedly been “heavy,” but have united residents in addressing longtime problems in the city’s public safety system. He points to policy changes he’s made in the department since last year, including clearer guidelines for officer use of force and a ban on most no-knock raids.

“There’s not a mayor in this entire country that is content with the pace and progress around police reform, and count me in with them,” Frey said. “That being said, we have instituted a litany of reforms, I’m talking about dozens of reforms, pushing for that full structural change we need to see in the department.”

Frey said rising violent crime in Minneapolis, including fatal shootings, shows the city needs to have more police officers out on the street, not fewer. Frey said he especially hears this from people who live in north Minneapolis, which has experienced frequent gun violence. Minneapolis police report 79 homicides already this year, on pace to exceed last year’s total of 82. 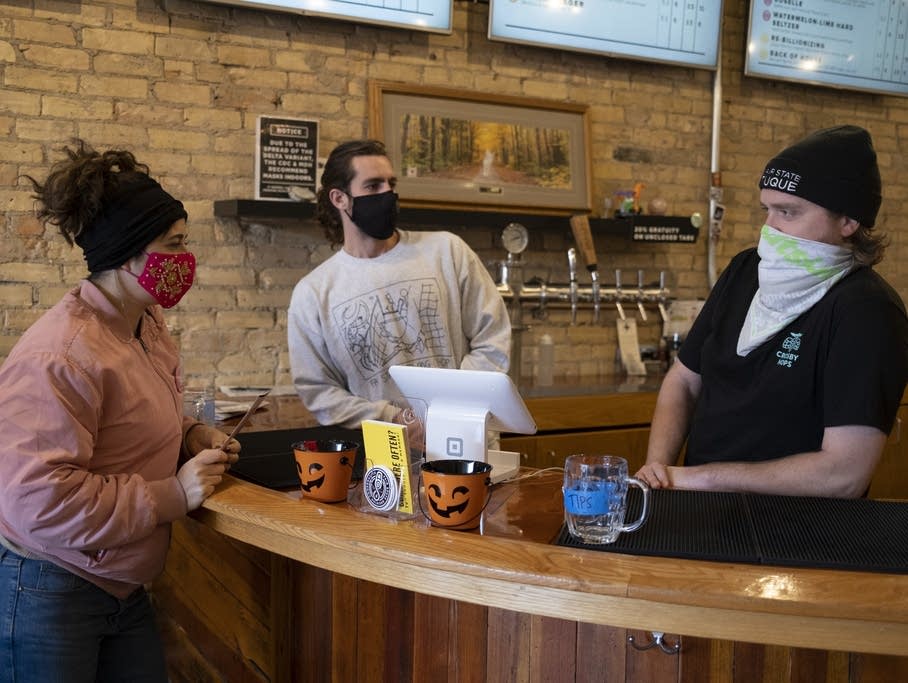 But Nezhad called out “fear-mongering” by opponents of the public safety ballot initiative, saying the claim “that the safety amendment means no one will be there to help you is the myth that’s being spread.”

“We’ve pretty easily found that [when] we have conversations with people about what the amendment really does, even if we just show them the actual language of the amendment, many more folks think of it as a reasonable next step,” Nezhad said.

“We deserve better than fear-mongering and appeals to division and fear,” Knuth said. “I have the trust that Minneapolis residents after the year and a half we’ve had are not going to continue down the path of status quo and policing with the exact same mayor who’s failed to lead us up to this point.” 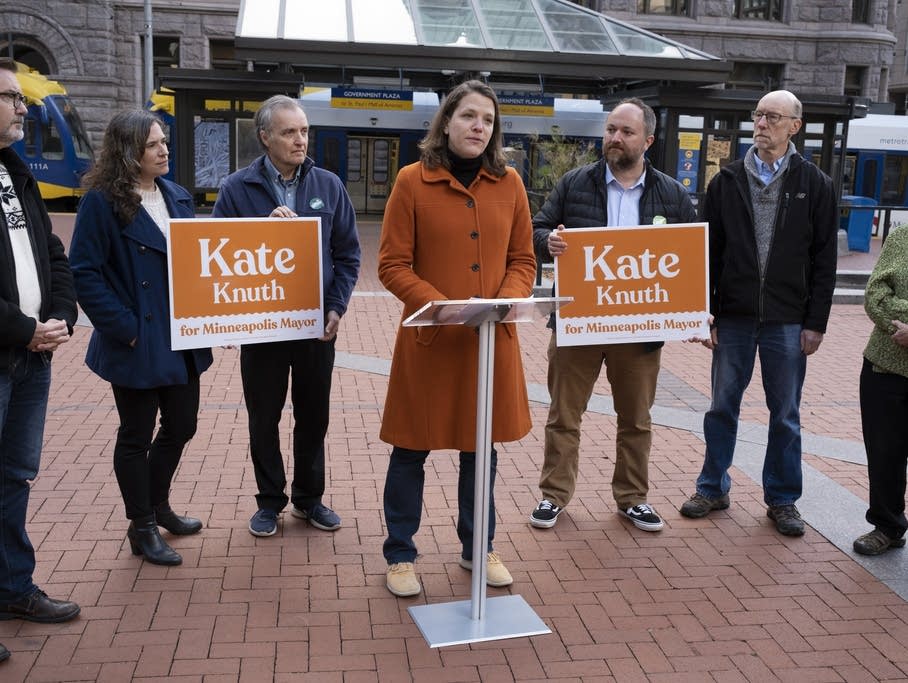 Frey said he believes that the city needs to recover after the last year and a half, but that it can’t just go back to the old way of doing things.

Public safety ballot question at the core of the election

Hamline University political science professor David Schultz said a candidate who presided over the sort of events Frey did would typically lose reelection. But Schultz said Frey’s opponents failed to consolidate around one candidate.

“He’s sort of defining himself as center-left to the right,” Schultz said. “I would say it’s still probably his to lose, but there’s an incredible number of variables that are out there that can affect whether or not he actually gets across the election line.” 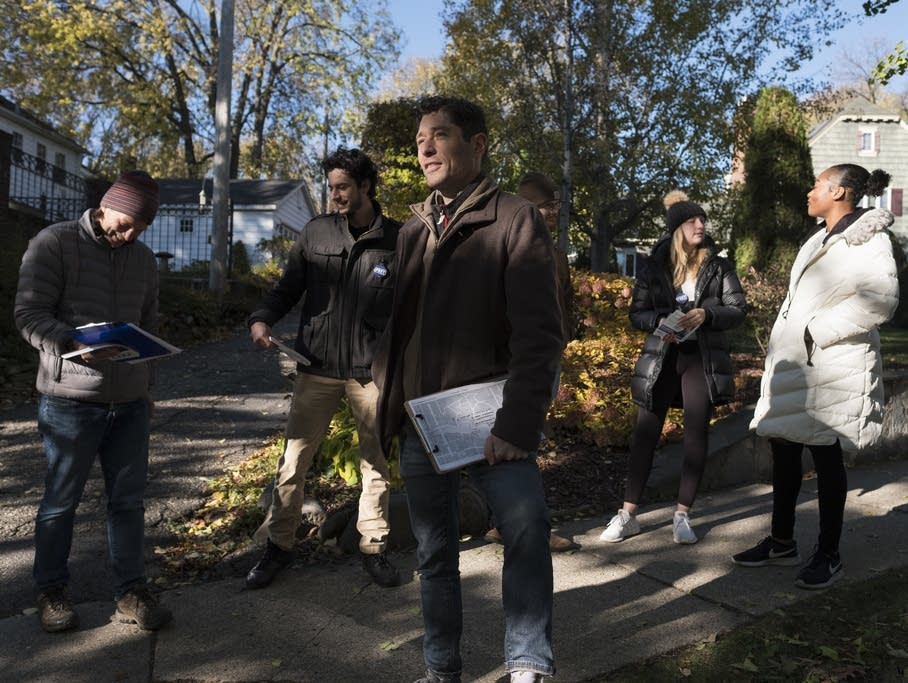 Opponents are putting their faith in the city’s ranked choice voting system in hopes of overcoming Frey. Voters in Minneapolis get to rank three choices for each position. As the candidates who earn the least votes are eliminated, their votes are reallocated to voters’ second and then third choices.

Challengers Knuth and Nezhad have said they’ll rank one another second. And they’re urging their voters to not rank Frey anywhere on the ballot, even as a later choice. Schultz says the strategy is an attempt to deprive Frey of the majority he needs to win the election.

“Let’s say he comes in at about upper 30s, 40 percent, and the progressives are capable of preventing him from being ranked further, there’s a possibility at that point that he could not win even though he turns out to be the first-round front-runner,” Schultz said. 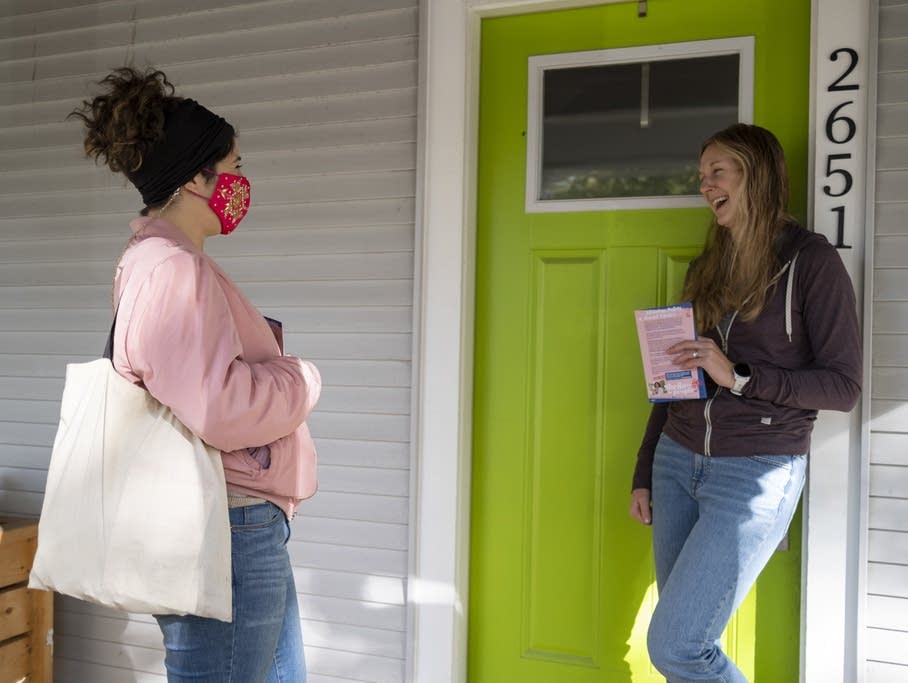 The Minneapolis election is on pace to likely be the most expensive in city history, Schultz said. Knuth raised $227,000 in donations and in-kind donations this year, Nezhad raised $231,000 and Frey has raised $676,000. A PAC that’s supporting Frey and opposing question two — the public safety ballot question — has also raised almost $1.6 million while a group supporting the ballot question has raised more than $1.8 million.

Nezhad said she’s focused her resources on directly engaging with voters, with her staff of 14 knocking on more than 30,000 doors this election. Nezhad said she’s used the campaign as an opportunity to have conversations with voters about their visions for finding “safety beyond policing” — not just to oppose Frey.

“If we get rid of these single actors, that doesn’t change the systems that are bringing harm,” Nezhad said. “So I really try to focus with my campaign on my solutions, not just the fact that Mayor Frey has failed.”

At the core of the 2021 election is the ballot question that would replace the Minneapolis Police Department with a new Department of Public Safety in the city’s charter. Frey opposes question two, saying it would result in “14 bosses” for the police — the mayor and 13 council members. Both Nezhad and Knuth support it, arguing that efforts at reform are stymied under the current structure. 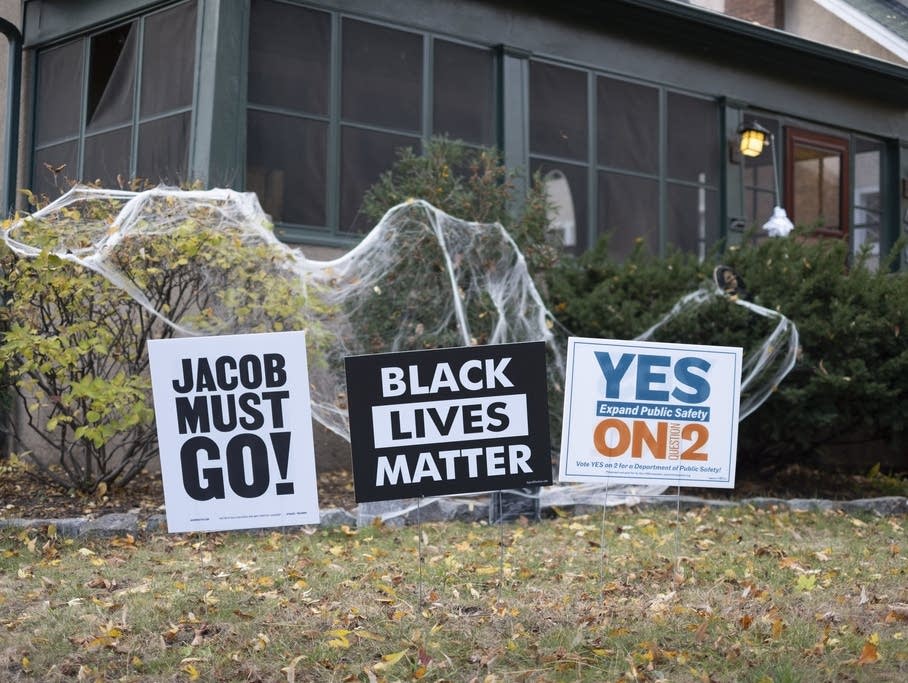 Political figures in the state are also lining up to support their preferred candidates. Statewide elected officials like Gov. Tim Walz, U.S. Sen. Amy Klobuchar and Attorney General Keith Ellison are backing Frey. U.S. Rep. Ilhan Omar has endorsed both Knuth and Nezhad, and urged voters not to rank Frey. The pair also has more endorsements from local elected officials than Frey.

“This is an issue that, even if it plays well in Minneapolis, does not play in the suburbs, does not play among independent voters, swing voters,” Schultz said. “If this were to pass, this becomes, front and center, a 2022 election issue for Democrats all across the country.”

If the ballot initiative fails, Schultz said it may affect the momentum of the national police accountability movement.

“This is basically a signal for what? Probably that police reform is not on the agenda anywhere else in the United States,” Schultz said. “If you can’t pass it in Minneapolis, the city where George Floyd was murdered, you probably can’t pass it anywhere else.”